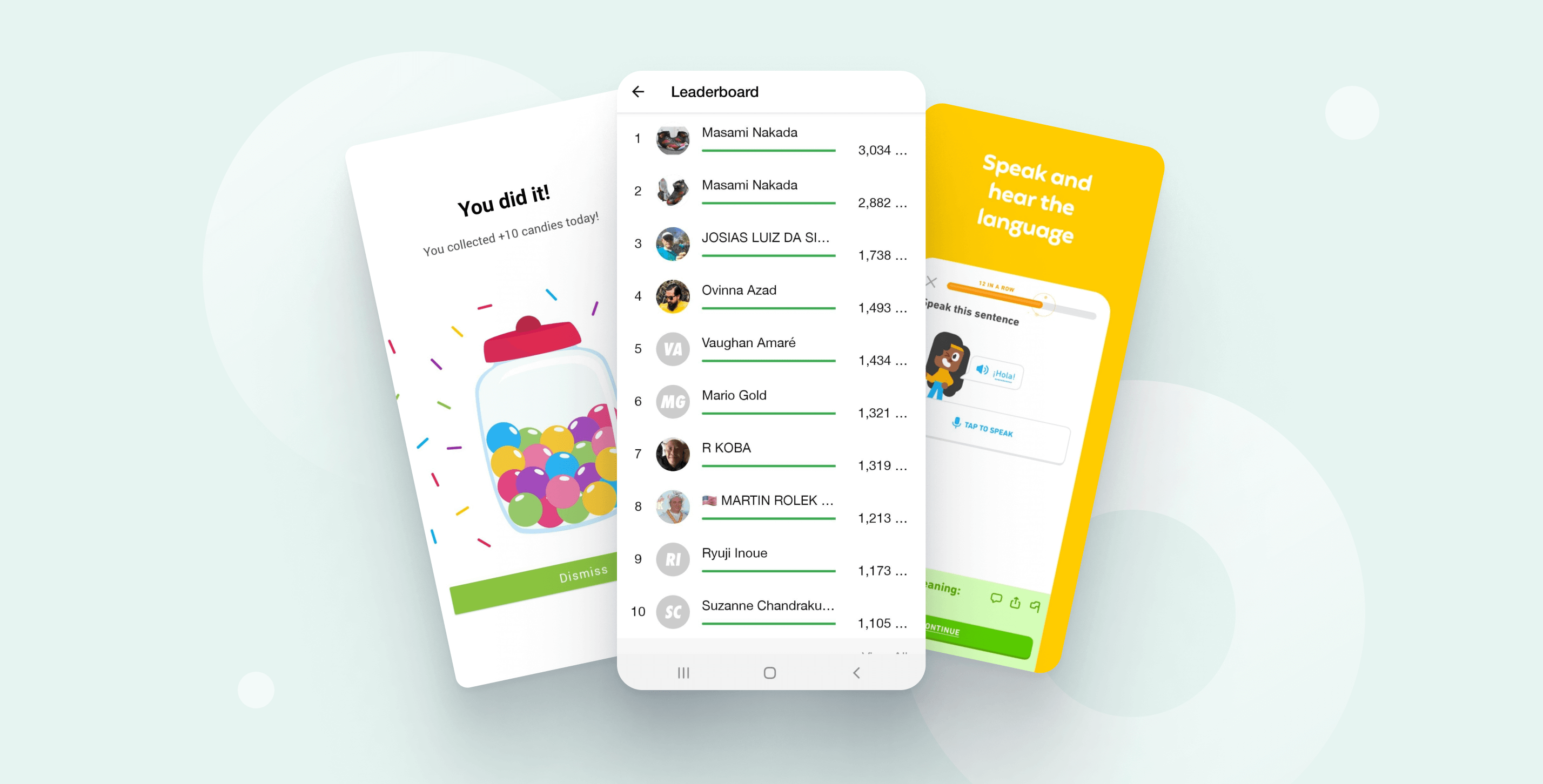 Gamification has taken the world by storm.

The application of gamification in various industries has seen exponential growth over recent years because it’s such an effective way to increase user engagement, motivation, and retention levels.

In this post, we’ll take a look at some mobile and web apps using gamification to keep their users engaged. 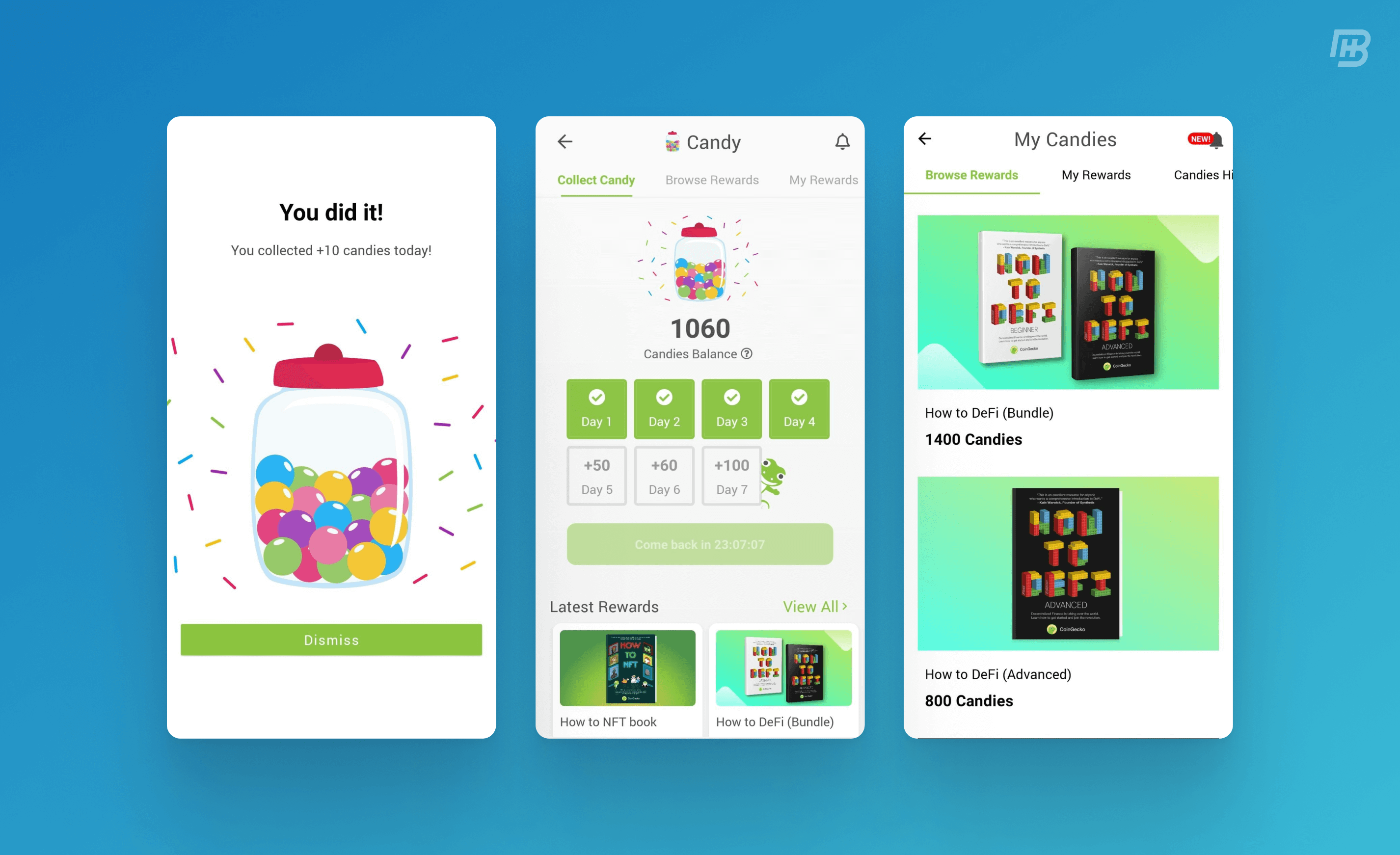 CoinGecko is one of the world’s largest independent cryptocurrency data aggregator with over 6,000 different cryptoassets tracked across more than 400 exchanges.

In 2020, the platform introduced their form of gamification – CoinGecko Candy – as an incentive to keep their users engaged. Users can collect “candies” from CoinGecko on a daily basis. They can then redeem these candies for exclusive goodies offered through the CoinGecko rewards portal. At the time of writing, goodies currently include CoinGecko store vouchers, DeFi eBooks, exclusive discount vouchers, and limited edition NFTs.

Currently, candies can only be redeemed towards reward items, but who knows? Maybe they’ll eventually become a cryptocurrency or token of their own. 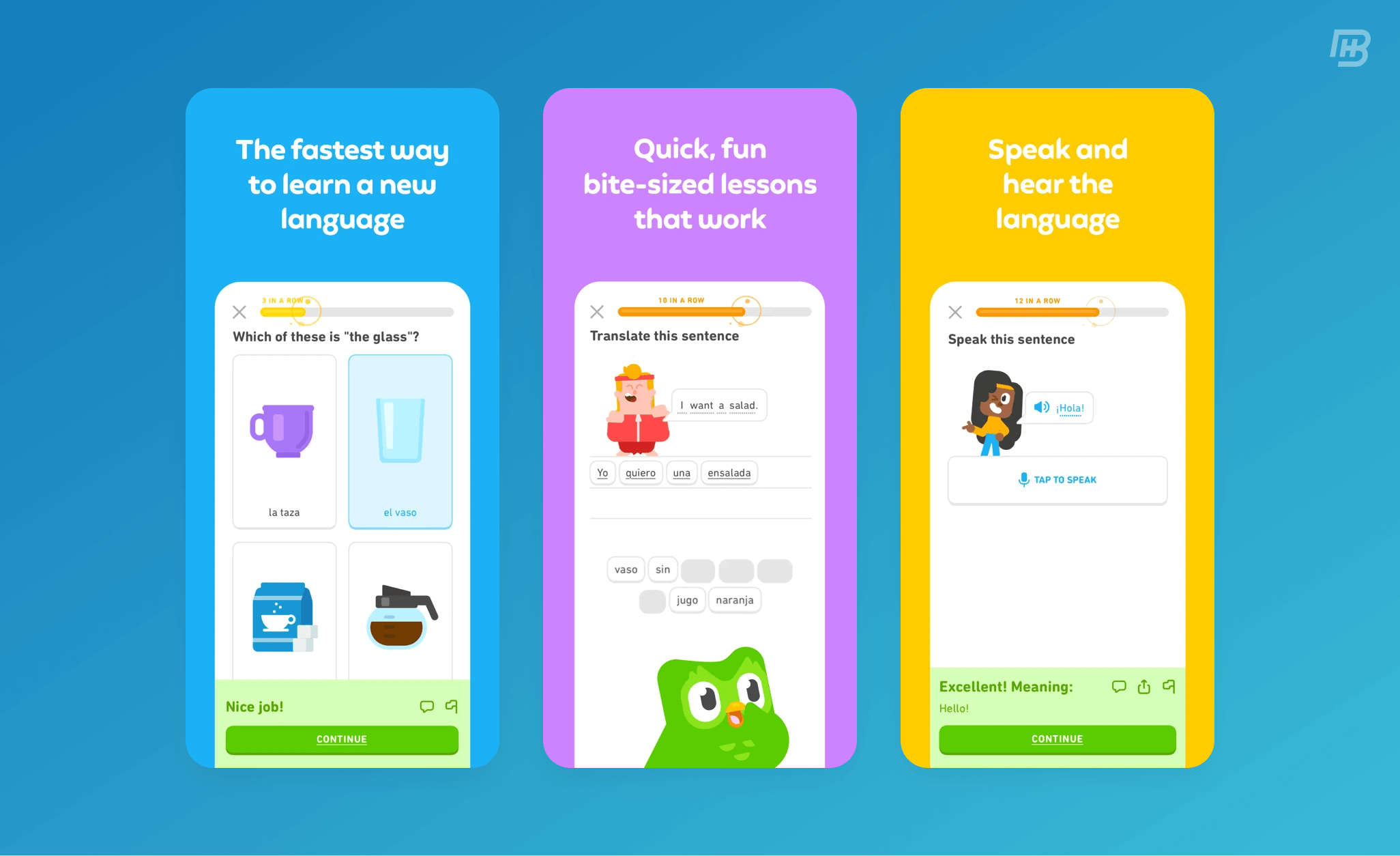 With over 500 milion registered users 40 million active monthly users, Duolingo is the most poular language learning app in the world.

The app, which offers 106 different language courses in 40 languages, is one of the best implementations of gamification done right. The company attributes its strategic use of gamification for its success at helping users develop effective and consistent daily learning habits.

The app has incorporated a number of gamified elements in keeping their users consistent with daily usage. Streaks, XP, badges, achievements, leaderboards – you name it. The entire app is essentially a game when it comes to language learning. 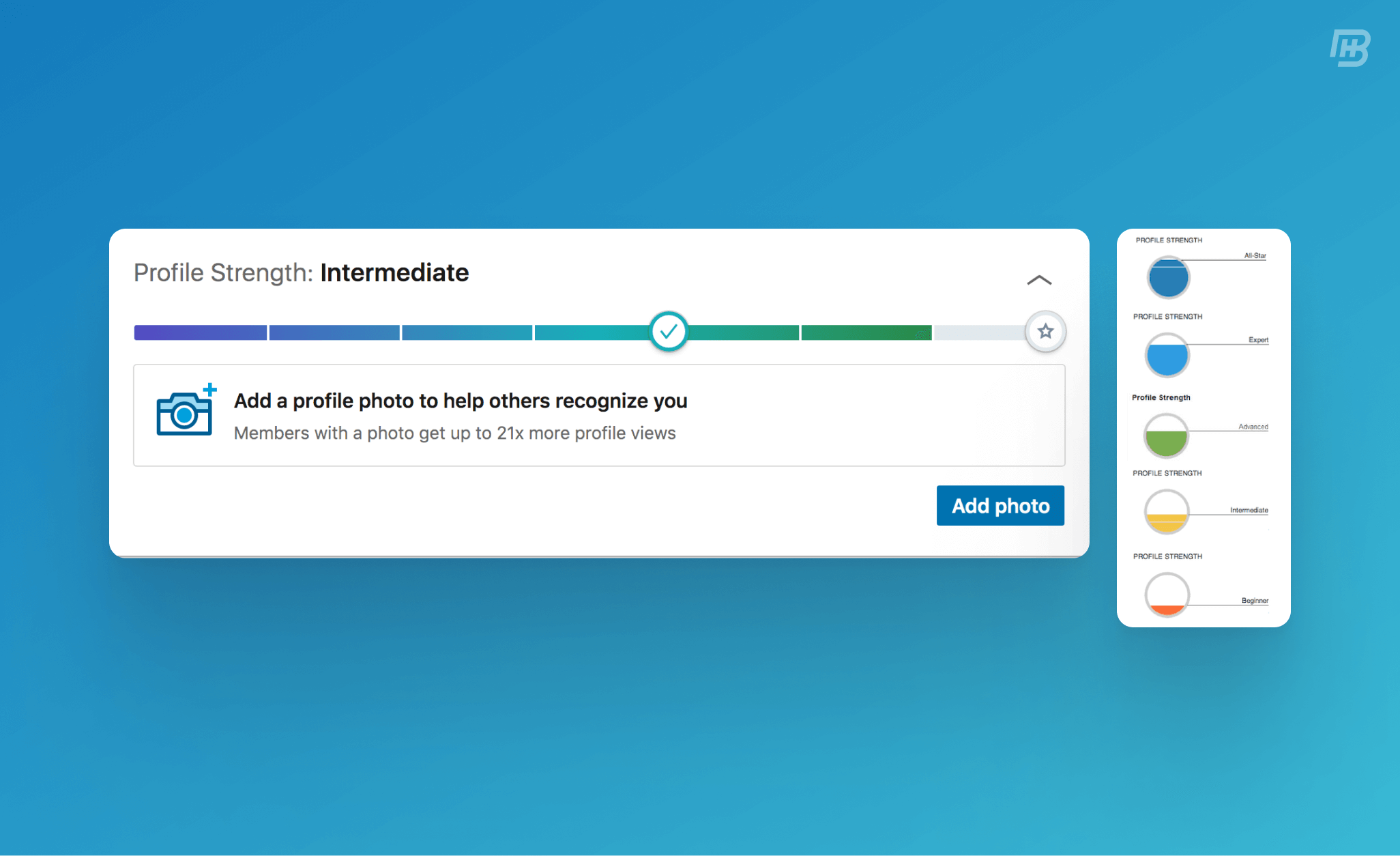 LinkedIn needs no introduction – it’s arguably the definitive social network for professional networking. They’ve incorporated an element of gamification into their profiles by displaying progress bars and profile strength.

In order to increase profile completion, LinkedIn shows a profile strength bar right within the user’s dashboard. By completing certain actions like adding a profile picture or skills to your profile, the bar increases. This works because it keeps the users engaged invested, and instills a sense of ownership into the platform. 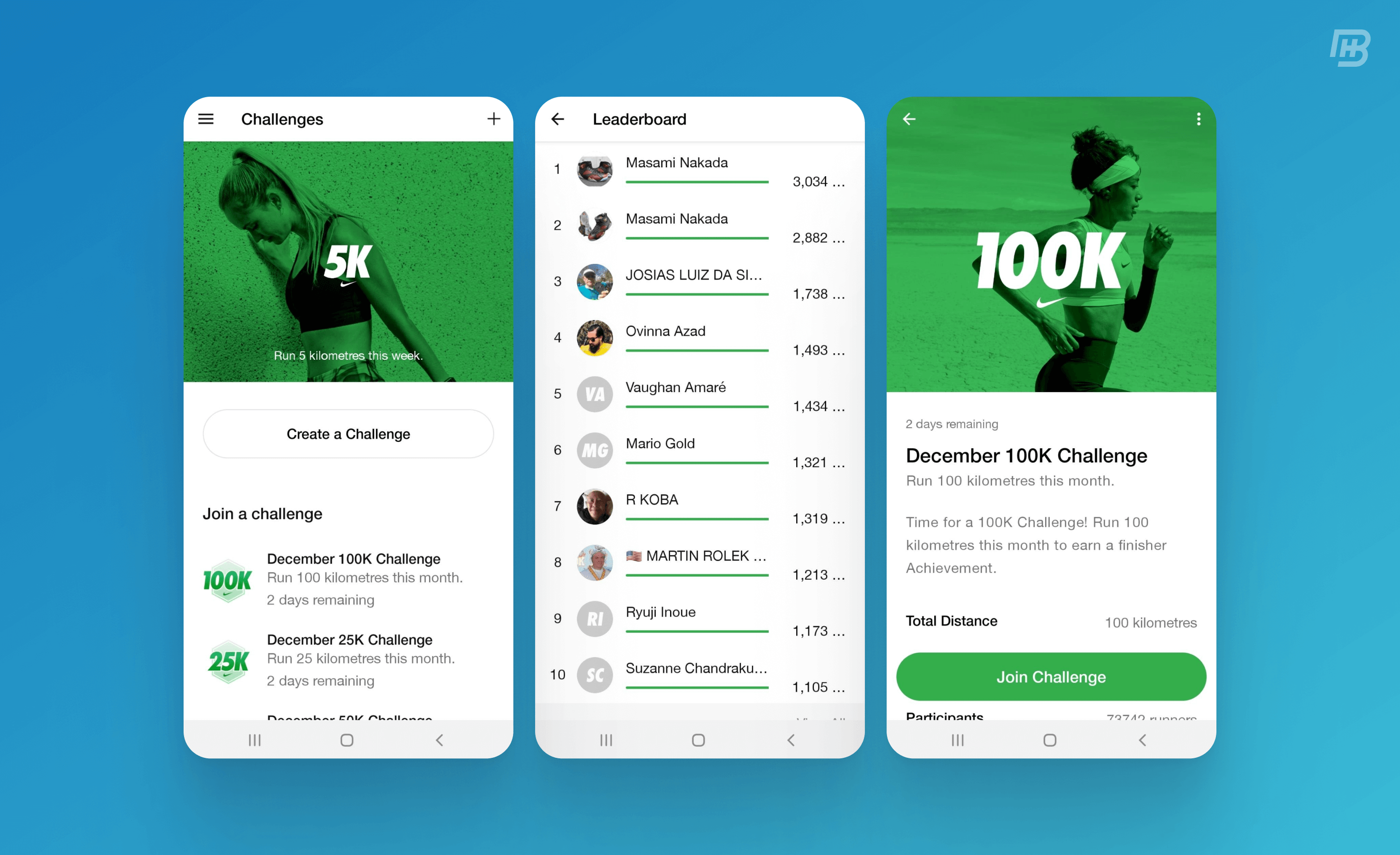 Nike has incorporated elements of gamification into one of their own apps, Nike Run Club.

Nike Run Club’s usage of gamification features, social elements, social and user-friendliness make it one of the top running apps in the market today.

To keep users engaged, the app features reward systems, unlockables, and leaderboard rankings. The app has also added challenges that users can join and participate in with other running buddies. When users complete a challenge, they earn a trophy under their Achievements. 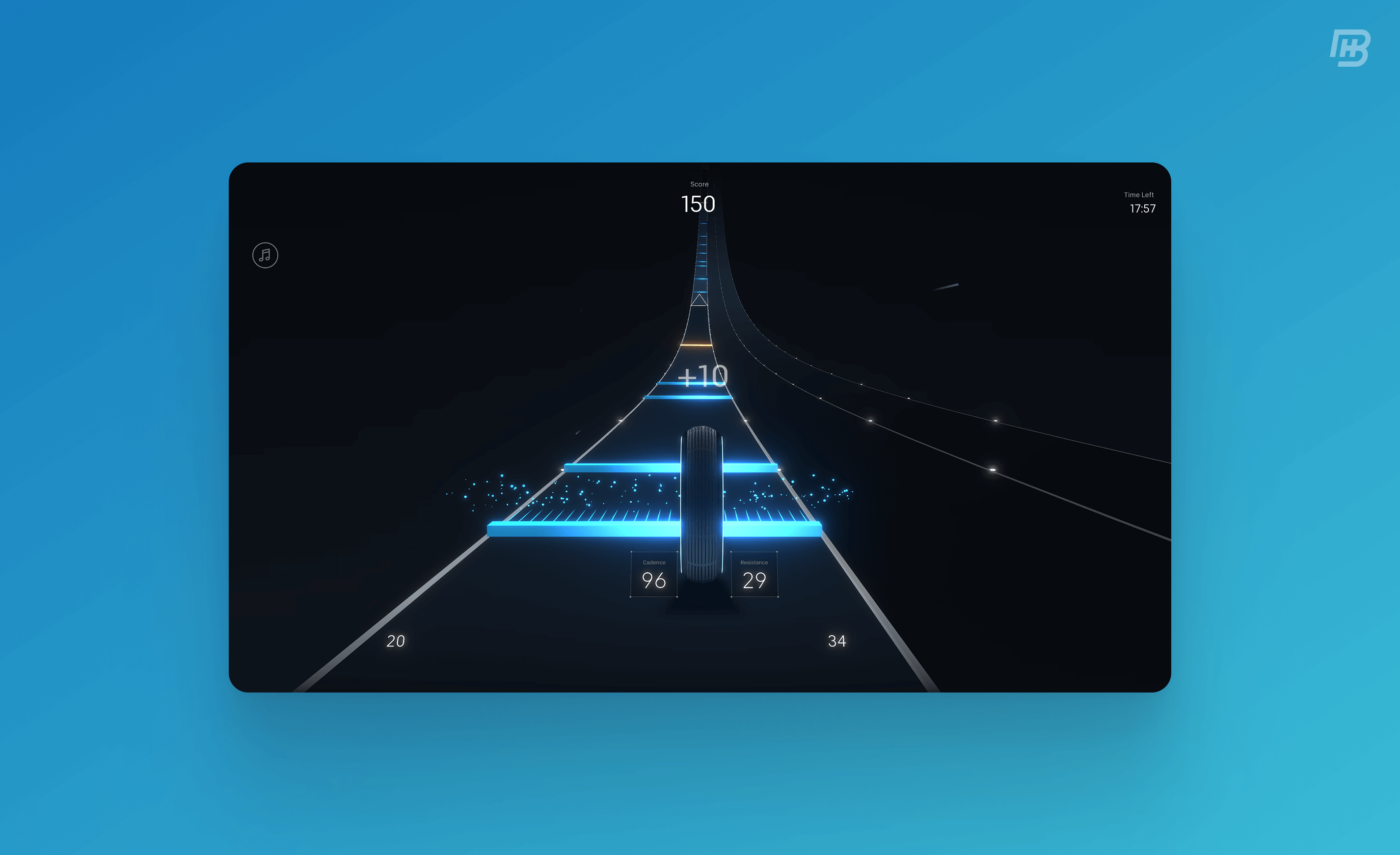 The game is a music-based experience, with players tasked to control an on-screen wheel and meet goals by changing up their speed, resistance, and more. The goal is to score the highest points possible.

“Peloton created Lanebreak to complement instructor-led classes with a fresh new experience for members, giving them more ways to stay engaged and motivated with their workouts,” the company stated in a release. 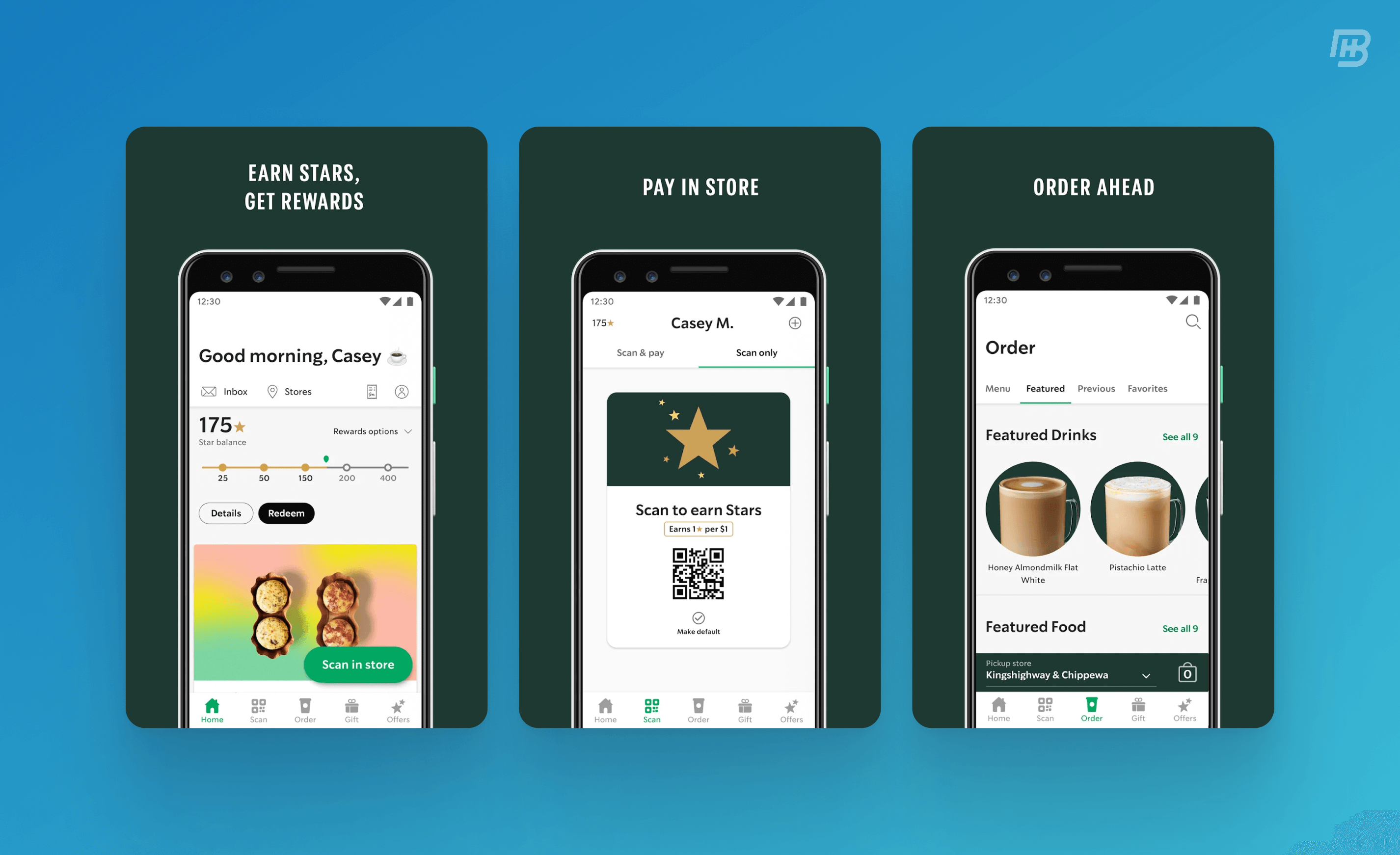 The Starbucks mobile apps does a fantastic job at keeping you coming back for more. The ‘My Starbucks Rewards’ program allows users to earn stars everytime a purchase is made using the app. There are different levels of star levels you can fall into based on the amount of stars you’ve earned.

The more stars you earn, the better perks and rewards you get. Some of these rewards incldue free refills, birthday beverages, merchandise, and more. These gamification elements and the ability to earn rewards are driving customer loyalty and keeping them coming back for more. 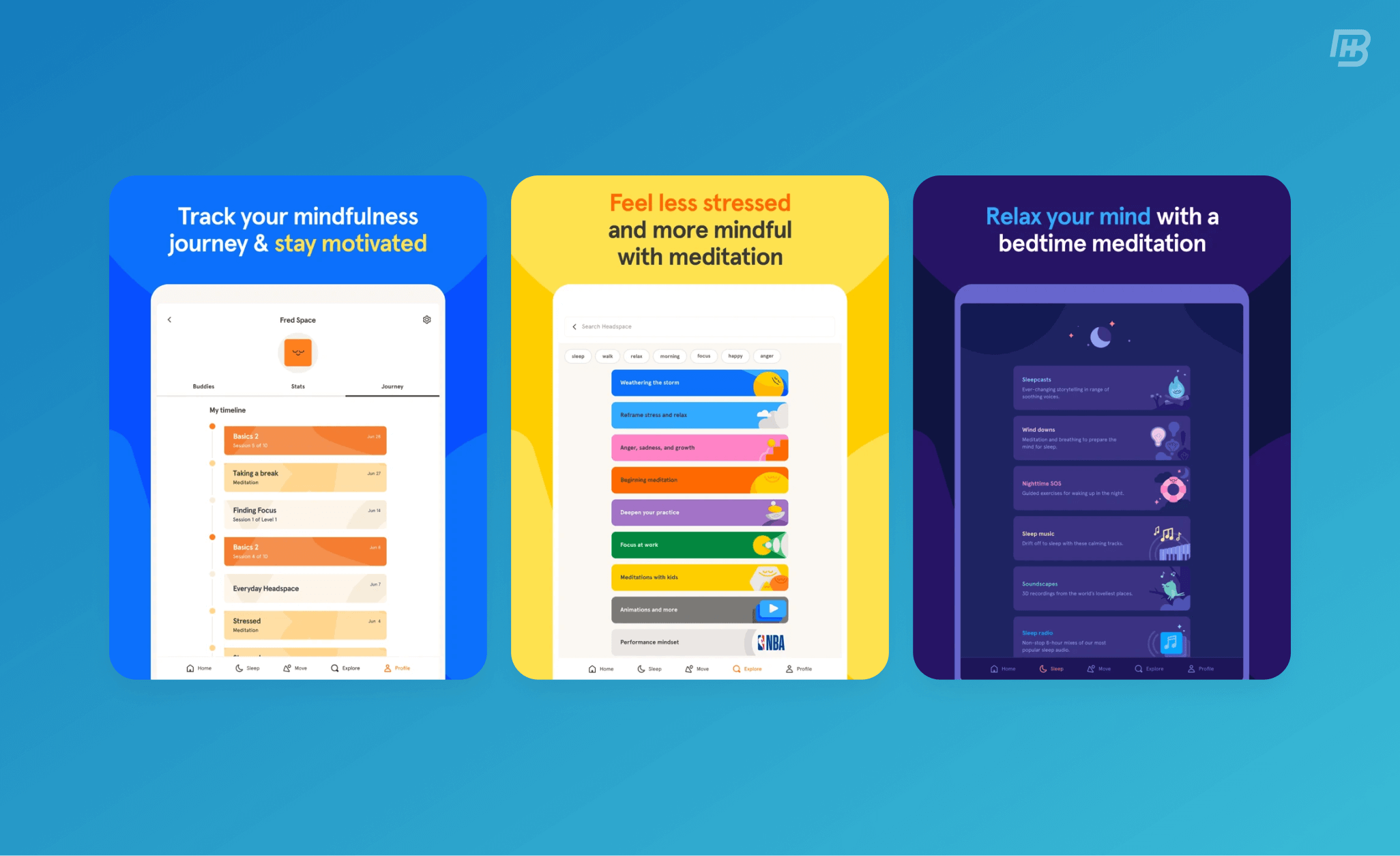 As one of the most well-known apps in the meditation space, Headspace arguably brought meditation to the mainstream masses. The app makes it fun, easy, and rewarding to meditate and learn the art of mindfulness and how to focus on staying in the present moment.

Similar to Duolingo, Headspace uses a combination of elements, friendly illustrations, and animations to keep its users engaged. Gamification just doesn’t have to be about points and achievements – it can be about making your entire app experience fun and easy to explore. This prompts curiosity by giving users the ability to freely roam around. That’s what Headspace does exceedingly well. The app allows its users to explore and try out what it has to offer without any constraints, just as a child would at a playground. 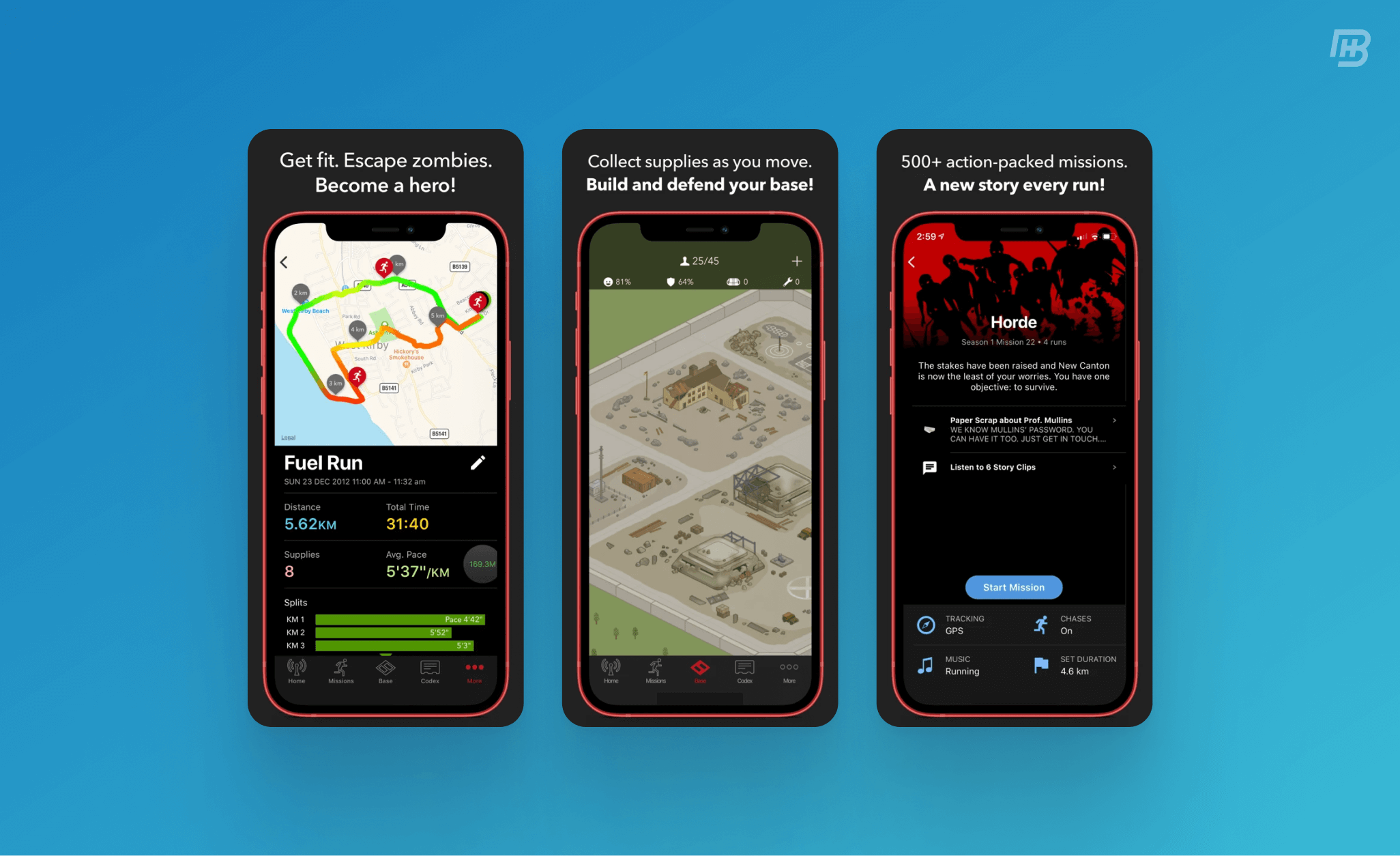 The ‘Zombies, Run!’ app has become one of the most popular running apps, thanks to its immersive atmosphere, creative storyteling, and gamified approach to fitness – all wrapped in a fun and unique zombie-based theme.

The app allows players act as the character “Runner 5” through a series of missions during which they run, collect items to help the town survive and listen to various audio narrations to uncover mysteries. 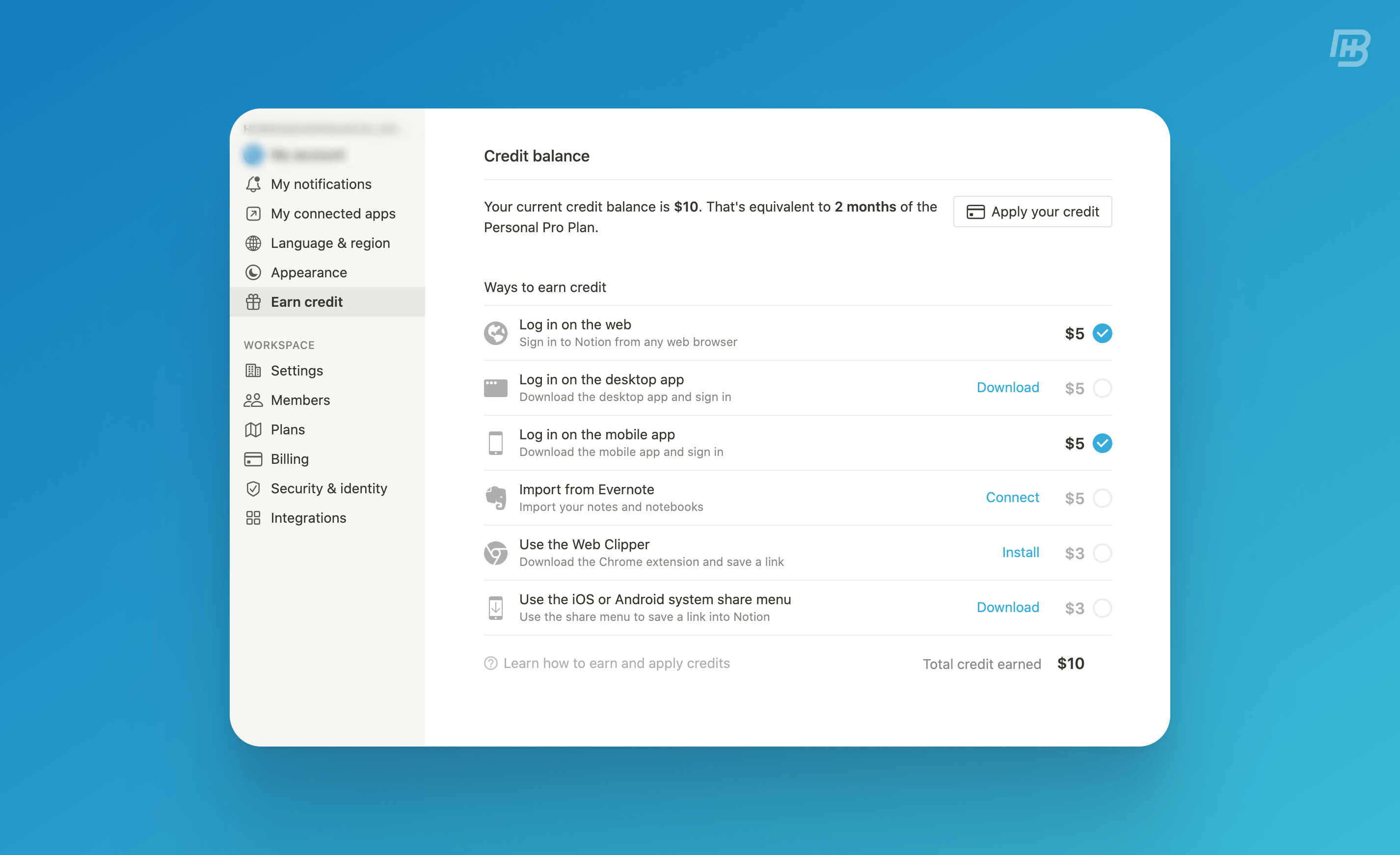 Notion is a multipurpose productivity app that offers a combination of notes, databases, tables, kanban boards, calendars, and more all packed into an single platform.

Notion added a little gamification to their platform through how its users obtain credits. Credits can be earned by completing various actions on the app, such as logging into their various device apps, importing from Evernote, or using their Web Clipper browser extension. It’s a simple form of gamification. The credits can then be applied to Notion’s paid premium plans. 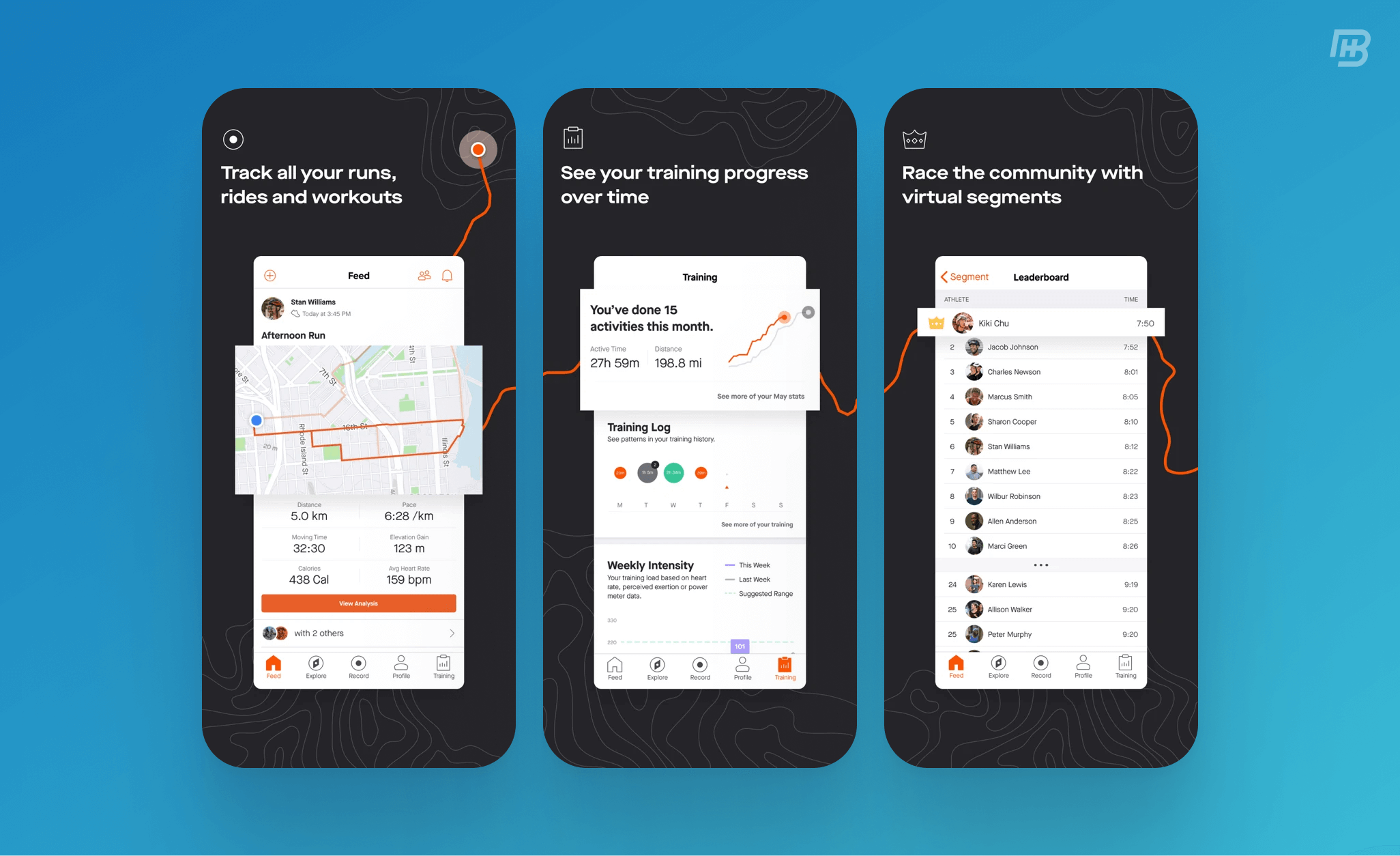 Strava is a fitness app and social network that focuses on cycling and running using GPS. With over 95+ million users, the app shows no sign of slowing down.

“In 2021, global activity rates on Strava continued to rise to new record levels, with over 37 million uploads per week, totaling 1.8 billion public uploads over the past 12 months.” (source)

During the pandemic, Strava’s growth exploded and is adding around 2 million users per month. Strava does an exceptional job in keeping their users motivated – and one of the app’s strongest examples is its ingenious “segments” feature.

With Strava Segments, you can compete for a top spot on a leaderboard against any other user who has also completed that “segment.” This could take place on your street or local trail.

Are there any examples you think are interesting and you’d like to see added to this list? Feel free to send me an email.

Check out some related posts
View All

Learn how ProdPad uses gamification to onboard its uses and increase completion rates.
Read More
1 2 Next »

Helpful resources for startups to improve their growth & UX
View All

A framework to help you think about about engineering addictive user habits into products.
View template

Get crystal clear on your assumed target audience by creating a customer archetype.
View template

Visualize the big picture of your UX and design projects, and get a convenient structure that holds all of your important data.
View template

An easy way for product managers to define a prototype, build a product increment or a Minimum Viable Product.
View template

A framework for thinking about the formation and engineering of user habits.
View template

A simple but useful framework for analyzing your organization's strengths, weaknesses, opportunities, and threats.
View template

A one-pager template that will help you lay the groundwork for creating a new product or MVP.
View template

A simple and succinct blueprint for your new startup idea and its main value towards users.
View template

A framework to analyze the various key factors that may influence your new startup idea from the outside.
View template

A visual representation of how your customer experiences your product or service.
View template

A framework that allows you to map and look at the bigger picture of your growth strategy and plan.
View template

A concise one-pager that is a simplified version of traditional business plans that focus on the core aspects of your business.
View template

A template to help you identify and analyze your competitors and set the direction for where your startup could go in the future.
View template

Visually represents the relative position and perceptions of competitors (as well as your own brand) in the minds of customers.
View template

A framework that helps you to clearly analyze and understand both the business and user sides of your product.
View template
hello world!